After World War II, the United States government and citizens owned as much as 80% of the gold in the world. More than half of the gold was stored at Fort Knox. Many in high places have suggested there is precious little gold in those vaults today.

No one has been allowed to audit Fort Knox
since the Eisenhower Administration (1955).

HOW MUCH GOLD IS LEFT IN FORT KNOX?  It would be a good idea for Congress to find out if the U.S. really owns as much gold as is reported. Congress should audit Fort Knox (60% of total reported gold), Denver (18%), and West Point (22%). Many times since 2008, the United States Mint has been seriously backlogged with orders for American Silver Eagle coins and American Gold Eagle coins. This would lead one to suspect the U. S. substantially overstates the amount of gold and silver it owns.

ARE AMERICA’S GOLD RESERVES IN PRIVATE HANDS? The U.S. is listed as the largest holder of gold in the world. In 2005, the U. S. Treasury claimed to have 261.5 million oz. of gold. According to published figures, America owns 10,792.6 tons of gold.

President Reagan’s “Gold Commission” would have disagreed with those statistics.  In 1981, the President pursued an investigation of a return to a gold standard.  He appointed the “Gold Commission” to examine the books of the U.S. Treasury.  The commission came to the conclusion the U.S. Treasury owns almost no gold at all [only a small amount of gold at the U.S. Mint]. The Federal Reserve holds whatever gold is remaining at Fort Knox (etc.) as collateral against the debt America owes to the privately held central bank.

CONGRESS SHOULD FIND OUT. What is the truth? Are U.S. gold reserves in the private hands of central banks such as the Federal Reserve? Mining sources report 8,000 tons of gold have left the country since 2007. 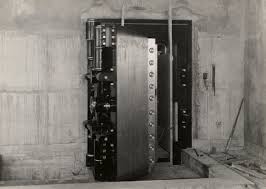 Congress must audit Fort Knox and the Federal Reserve.

“The illegal we do immediately. The unconstitutional takes a little longer.”  [Henry Kissinger, “The Washington Post,” Dec. 23, 1973.]

Gold and silver money are required by the U.S. Constitution. Article I, Section 10 of the Constitution requires legal money: “No State shall… make any thing but gold and silver coin a tender in payment of debts…” In 1792, an Act of Congress defined a legal dollar:  0.7734 Troy oz of silver -or- .04375 Troy oz of gold.

In 1933, an unconstitutional law forced U.S. citizens to hand over tons of their personal gold to the Federal Reserve Bank of New York. After Americans turned in their gold at $20.67/oz, the price of gold was raised to $35 per ounce (1934 Gold Reserve Act). The government made a huge profit by raising the price of gold 69%.

The Exchange Stabilization Fund (ESF) was created by Treasury official Harry Dexter White (established by the 1934 Act). Two billion dollars of the profit from the government seizure of gold from private citizens were used as seed money for White’s ESF. In Harry White’s day, the ESF funded the Office of Strategic Services (the OSS became the CIA):

“The problem of putting excess gold to use is constantly receiving attention from… the office of Harry White, the Treasury’s principal monetary expert.” [Atlantic Archive, Feb. 5, 1940.]

In 1941, White was appointed to manage the ESF. As liaison between the State Department and the Treasury, he managed foreign monetary relations (foreign loans/ exchange rates). By an amendment to the Gold Reserve Act (1945), the ESF received $1.8 billion in the form of gold bullion – 51,428,571.43 Troy ounces of gold.**

Tons of confiscated gold bullion
were transferred to the ESF.

Tons of confiscated gold bullion
were transferred to the IMF.

**The following data is from Obscurity to Notoriety: A Biography of the Exchange Stabilization Fund by Anna J. Schwartz, “Journal of Money, Credit, & Banking,” Vol. 29, No. 2, May 1997, Ohio State University Press:

The ESF and U.S. gold. The Exchange Stabilization Fund was designed by Harry Dexter White, and established by the Gold Reserve Act, January 31, 1934. Sec. 7 amended the Gold Reserve Act. 8: The amendment directed the Secretary of the Treasury to pay $1.8 billion ESF capital in the form of gold, July 31, 1945, p.135.

The private Federal Reserve Bank participates in U.S. foreign policy decisions, monetary policy, and foreign loans: Section 4(a) of the Gold Reserve Act created a National Advisory Council “to coordinate the policies and operation in making foreign loans or engage in foreign financial, exchange or monetary transactions.” The council included the Chairman of the Federal Reserve Bank.

The Federal Reserve became a partner in exchange market intervention (ESF is independently funded by Treasury). “The Secretary of the Treasury… is authorized to deal in gold and foreign exchange for the account of the Exchange Stabilization Fund… (Section 10/ 1034 GRZA, 31 U.S.C. 822a) as amended.” (March 1982, Congressional Report. p.136.) “The Treasury next persuaded the Federal Reserve to serve as its partner in exchange market intervention. So begins the second period of ESF intervention operations.”

U.N. monetary laws contradict the U.S. Constitution. In 1978, gold was formally banned from the U.N. monetary system by an amendment to the IMF Articles of Agreement (1st Amendment, Article IV). No country is allowed to back its paper money with gold (the Swiss franc was de-linked from gold May 1, 2000). Participating countries are not allowed even to peg their currencies to gold. The amended Bretton Woods Agreement Act (sec. 24) prohibits the U.S. from backing the dollar with gold:

“The United States is barred by its obligations under the Articles of Agreement of the International Monetary Fund… from adopting an exchange arrangement by which the external value of the dollar is established and maintained in terms of gold.” [The “Gold Commission Report,” March 1982, p.137.]

Agreements such as WTO, NAFTA, CAFTA, SPP, and TPP transfer sovereign management of U.S. trade to trans-national corporations and the United Nations. Global governance is far more than just changing the world’s economy over to a single currency. An “empowered U.N.” is a euphemism for worldwide force. Internationalists anticipate the disarmament of all member nations… including the United States. More than half of America’s solders already serve under the banner of the U.N. or United Nations NATO command.