April 18, 2017, Hugo Chavez is ‘spinning in his grave:’ http://www.zerohedge.com/news/2017-04-18/maduro-said-prepare-swap-venezuelas-gold-dollars-stay-power-unconstitutionally

Venezuela’s Hugo Chavez carried out his threat to nationalize gold mines August 23, 2011. He then demanded the return of 210 metric tons of gold the country had stored in the Bank of England and other bullion banks. 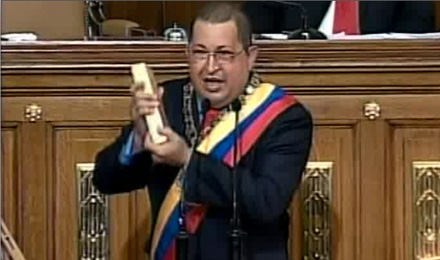 The Venezuelan gold bullion held in Western banks totalled about 17,000 good delivery bars. Each of the bars was 400 ounces of pure gold. The Financial Times said the Bank of England stored 99.2 tons of the Venezuelan gold. Venezuela also had gold deposit accounts with Barclays, HSBC, and Standard Chartered. Each of the banks was expected to deliver gold to the Bank of England [and then approximately forty shipments of gold would travel to Caracas].

Venezuela’s numbered gold bars were supposed to have been safely stored. But when the banks failed to meet Chavez’s demands promptly, he accused them of storing gold-plated titanium bars, and called the alleged ruse by the mega-banks “virtual gold operations.”

That summer of 2011, rumors were flying surrounding possible gold shortages at bank storage facilities. In Quarter 3 of 2011, someone purchased almost 150 metric tonnes of gold. Were the banks covering Chavez’s demand for the return of Venezuela’s approximately $11 billion worth of gold bullion?

In Quarter 3 of 2011, un-named banks purchased 148.4 metric tons of gold —the highest quarterly level since 2009. Because of confidentiality restrictions, we still do not know which banks made a significant number of the purchases.

In an interview with the Wall Street Journal, the World Gold Council said it was unusual for purchases of that magnitude not to be reported publicly. Buyers of gold tonnage are usually not anonymous. But to this day, the identities of the banks remain a mystery; and traders are still speculating.

During the wild ride of 2011, we reported that all would not end well for Venezuela’s leader:

“Although Chavez is a survivor of at least one, CIA-assisted coup attempt, I have to think his days are numbered.  In 2001, he announced his preference for the Euro; and for more than a decade, he has encouraged OPEC members to switch out of the dollar.”

♦ UPDATE: Goldman Sachs negotiated with cash-strapped Venezuela to ‘claw back’ the gold hoard from South America.  As of 2016, Maduro has sold the lion’s share of the gold Chavez returned to Venezuela in 2011. (To meet debt payments, about 1/5th of the gold was sold in 2015 alone.)